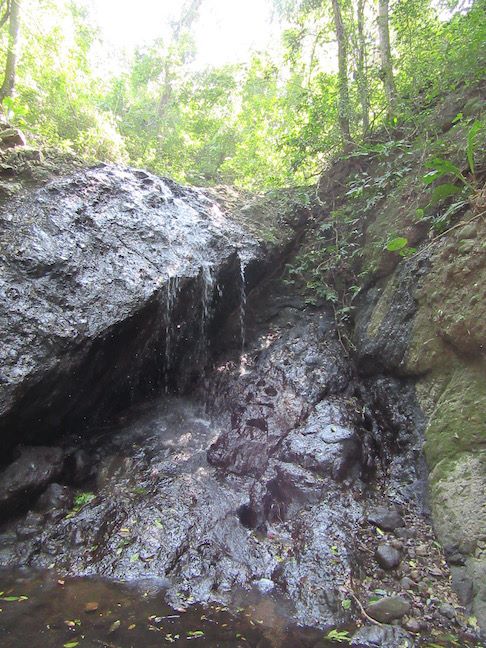 Three weeks ago, I hiked to the waterfall with my friend Terry. This is my sacred spot very few people in the history of the planet have ever seen. It is hidden around the bend of a stream, shaded by a canopy of tall trees growing on the side of a rocky mountain formed when Volcan Maderas erupted some unknown millennium ago. It is not easily accessible to most of the animals that inhabit the forest. There are not many humans who would have ever had reason to stumble upon it, either.

I still remember the feeling of clutching my hands over my heart, gasping and laughing when I realized this was part of Harmonia. Two days I ago I returned to the site, eager to show it off to my friends, but the landscape is now forever altered. It took the light from my soul for just a moment.

A large, very old hollowed out tree along the upper ridge of the gorge collapsed at the base, with the trunk now running against the rock wall and the treetop jammed into the lower pool, filling it with large branches and decaying leaves that have attracted algae as they decompose. I tried to move some of the submerged branches, but they were too large and heavy, with hundreds of smaller branches sticking out. Two weeks ago the bottom pool had a section of water 5 feet deep; now it is tangled knots of wood. The trunk blocks the rock climbing shortcut to the upper pool.

Another large tree (40’ ?) crashed from the fall. It could very well roll into lower pool as well during the next few months of rain. A third tree leans precariously over a cliff. Another single tree 20 feet from the base of the waterfall fell against the gorge last month. I have many happy never to be repeated memories of a solo male Howler monkey watching the humans from that treetop.

Oddly, a cairn (stacked rocks) I made two weeks ago still stood 12 feet away. Well, 4 of the 7 rocks were still in place in spite of the large commotion.

Looking up toward the left, there is now large patch of sunlight. I wondered how many years ago the sun splashed on the rocks and how long it will take for more trees and plants to fill in the space. As soon as that thought entered my mind, I began to landscape it in my head. There was never a space to grow flowers by the waterfall, but now I can plant hibiscus, white ginger, crepe myrtle, orchids and the tricolored purple/lilac/white Yesterday, Today and Tomorrow plant. Maybe a purple orchid tree and flaming orange malinche in the back.

My friends Jeff and Joanne suggested using the wood for benches, stairs, bridges, platforms and trails. It is inaccessible to trucks, so I cannot not sell it or use it for my buildings. I still have to wait for the rainy season to end to see what else washes away and manifest $3000 before I can begin the transformation. Until then, I am still a little sad at the thought of returning to see it in the destruction phase. I have not taken the back trail to the waterfall in a year. I am anxious at the thought, wondering if the beautiful hollowed out 300 year old tree is still standing. A year and a half ago a big storm took out two 60-inch diameter trees, blocking a smaller waterfall. I wish I had appreciated it a little more the last time I was there.

Rocks.  Millions or rocks on the beach where there was once mostly sand and sand where there was once beautiful flowerings plants rooted into earth. Last year the lake level hit the hundred-year high.  Three years ago it was at historic lows, so bad that the ports on Ometepe had to be dredged for the ferries to dock.  Two years of heavy rains and two years of hurricanes and now we are building a. natural retaining wall with the rocks brought in from the storms.

It has been almost four years since signing for the land that is Harmonia and every year the water run-off has a slightly different pattern.  The areas where the rain discharges into the lake are eroding along the sides.  We lost ten coconut palms and three orange trees that washed away on the hundred year high, as well a neem and a producing noni tree.  Two moringa trees collapsed last week.  The area beneath a major tree along the shore is flooded but it’s only June.   We have two more days of heavy labor to to fill in the run-offs with rock that feeds into a 1-2 foot wall, discharging the water in a less erosive manner.  The best route might be chicken wire and rebar and letting the natural woody weeds to grow through the sides.  The bamboo washed away in the last hurricane.  No one else seems to know about erosion control or have any desire to deal with their own properties.  My neighbor is in risk of losing 150 s.f. of land and has done nothing to rectify the situation,

I suppose all of this is important to know and will prevent failures in the future, but, oh, the physical labor!  I spent two days  hauling rocks (always good to let the make crew see the female boss twice their age pulling her weight) and replanting hundreds of zinnia seedlings from my yard. It was pouring rain today. I had a tank top, but no sweater or jacket, and it was cold.  I figured it was good time to plant, so I carried on for several hours until the idea of a cup of hot chocolate at home became too much of a distraction.

I pay heavy duty rock and machete work twice the prevailing rate and I limit it to 5 hours a day. Tomorrow morning a crew will be ready to chop down the way overgrown thorny ant trees (cornesuelo, of the acacia family) in the upper section.  It was cleared 3 years ago for the  drone footage and now it is an overgrown mess.  It’s so hard to keep up with one person and a limited budget.

What happened? Seven years ago, the vision for Harmonia came to me in the middle of a ceremony in the forest. Soon it will finally become reality.

I wanted to document every last experience, from the search for the land to the design of the courses. It’s all in my head, but something always got in the way of the writing.

Perhaps it is for the best, as so much has changed since I first set out on this path. Even the past few months have involved a huge shift in how this will manifest. And it will manifest, even though I still feel a bit anxious. Putting all of my faith in the universe has not been easy. Perhaps not publicly writing about it was for the best. Maybe it would have put undue pressure on me to have done something different along the way. Patience is not one of my virtues, but each time I have rushed into this project, there was always a message to wait. Confia con amor. Trust with love. This is my journey. I am still here and grateful for the delays that have shown me that Harmonia is more than a dream. 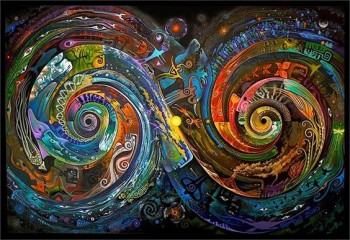