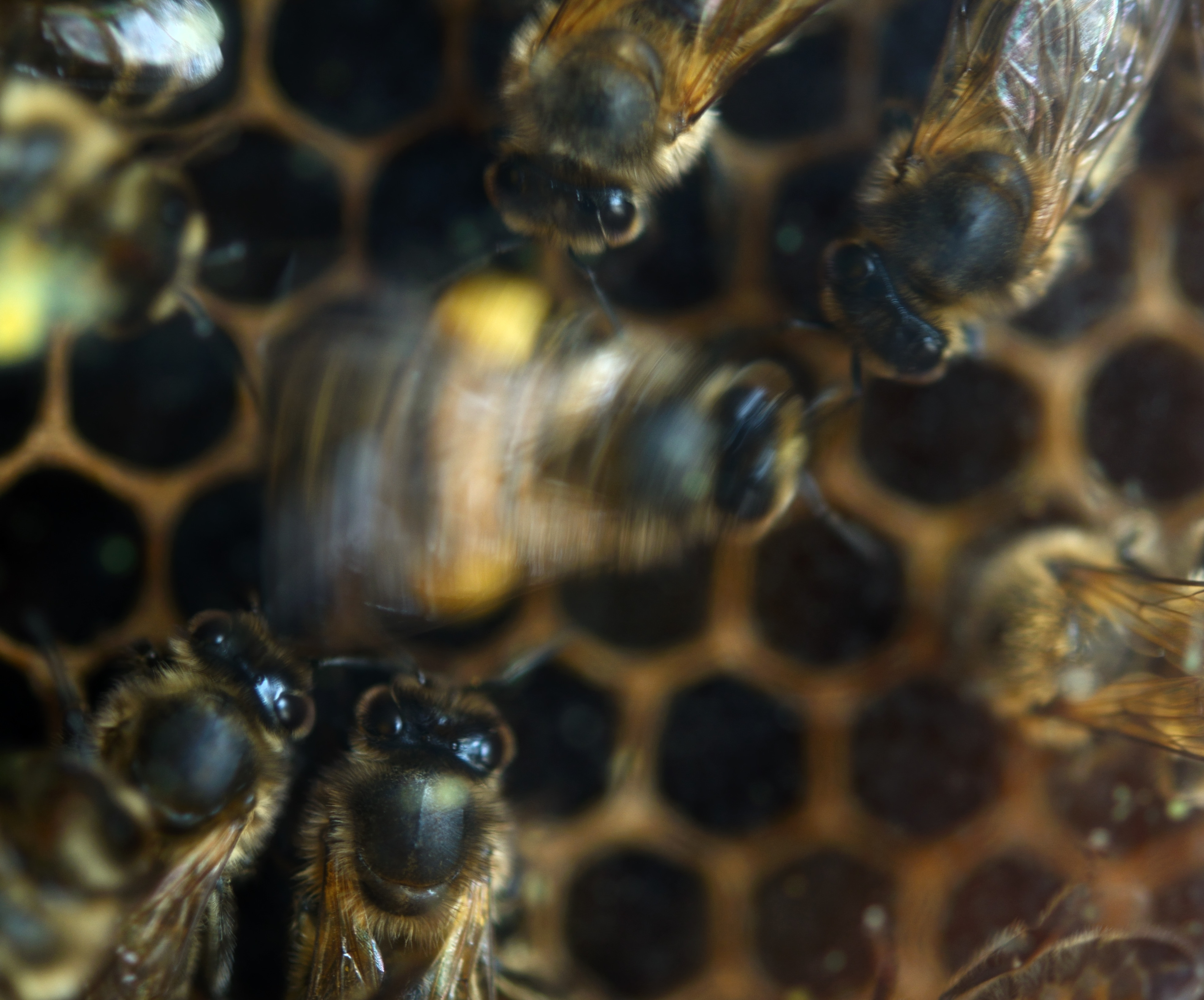 Did you know that honey bees dance?  You won’t see them shaking their thang on the dance floor, but inside the hive, honey bees dance to share the location of a food source with other worker bees to help them identify the flower.  The dance moves, duration and number of vibrations tell the colony the exact distance to the flowers, using complex mathematics that even take into consideration the movement of the sun one degree every four minutes.

Bees also account for strong winds, dancing as if the food is further away to indicate that more energy will be expended to reach the flowers.  With their sesame seed sized brains, honey bees use vector calculus to determine the most efficient route (faster than a computer) and tell the worker bees how much honey to store for the journey.

The worker bees who collect nectar and pollen are female, and thus they are the dancers, too.  When a worker finds a suitable food source, she will return to the hive with nectar to share with the other workers.

If the food source is more than 80 meters, the worker bee will perform a “waggle” dance to communicate the direction of the flowers.  She runs directly ahead for a short distance, then returns to the starting point in a semi-circle, runs directly ahead again, then make a semi-circle in the opposite direction, thus completing a figure eight series of movements.  The waggle comes from the wagging of the abdomen from side to side, creating a vibration that appears as a tail wagging.  She moves vertically to show direction toward the sun or away from the sun and to the sides in alignment to where the sun is at the moment of the dance.  She emits a buzzing sound by the beating of her wings at a slow audio frequency, which guide in relaying the distance of the flower.  The better the food source, the more excitement and faster the dance moves. The further away the food source, the more waggles in the middle of the dance.  The bee increases the waggle part of the dance by 1 second for every km of distance.

When the food source is closer, within 30 meters or so, the worker bee will perform the “circle” or “round” dance.  The round dance only tells the colony that there is a source of flowers close to the hive, not the location.  The bee walks in a circle, turns around, then walks the same circle in the opposite direction, repeating this over and over; the closer the source of food, the more cycles performed.  She may include a little waggle or generate a buzz if the flowers are exceptional quality for the hive.

The bees do not always dance.  They assess the needs of the colony and the quality of the nectar before making the decision to put out the moves.  Many workers will dancing is a good sign of a nectar source.

A honey bee scout will waggle to tell a swarming colony about the location of a potential new home, using the same directional signs in relationship to the sun.

The dances are not consistent from one bee to another, either.  Researchers have noted that each bee has her own calibration and that the wagging dance is not always spot on, but close enough to find the food source.

What happens when honey bee really wants to get down on the dance floor and party like its 1989?  When researchers gave bees cocaine to study addiction behavior, they found that bees react much like humans do: cocaine alters their judgment, stimulates their behavior and makes them exaggeratedly enthusiastic about things that might not otherwise excite them.  The bees on cocaine “danced more frequently and more vigorously for the same quality of food,” according to Andrew B. Barron, a senior lecturer at Macquarie University in Australia and a co-leader in the bees-on-cocaine studies.  “They were about twice as likely to dance” as undrugged bees, and they circled “about 25 percent faster.”

The bees did not dance at the wrong time or place; just enthusiastic and more excited about the food they found.  That’s like “when a human takes cocaine at a low dose,” Dr. Barron said. “They find many stimuli, but particularly, rewarding stimuli, to be more rewarding than they actually are.”

Occasionally, bees are drawn to fermented substances from decaying fruits and, like humans, get so drunk that they lay on their backs with their feet kicking the air like an angry child having a temper tantrum or the best man trying to break dance at your college roommate’s wedding.  It is the drunk bee dance performed by mostly drones who have no other purpose in life than to have sex with the Queen, at which point they will die (but with a happy ending).

There is a strict conduct code in the colony.  Alcoholism would destroy the cohesion bee colonies, so the Queen assigns guards to keep the drunken drones from the hive.