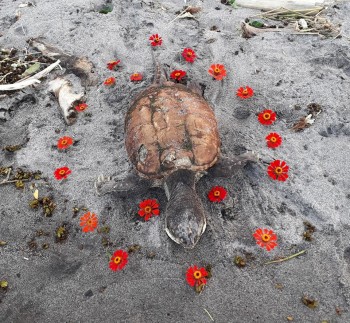 I was in the process of writing down my own intentions for Harmonia – what it means to me personally – when a wet nose bumped my hand. Linda. She wanted to go for a walk on the beach, which we have not done in a few days. After two years, I know exactly what she is thinking. I decided it was probably a sign, so I took off my glasses and headed down to the water, with Sufi following behind me.

About 20 meters to the left, I saw a large white heron standing at the edge of the lake, with 40 or so zopilotes (buzzards) grouped next to it. The heron flew to a more secure spot, but the zopilotes stood their ground. My black cat Sufi walked over and sat down next to them. The dog ran further down the beach, so I headed in her direction. When I turned back to look for Sufi, she was lost in a sea of black buzzards. I love my cat.

A tiny bit further down the beach, I saw what looked like to be an odd piece of wood that had washed on the shore. On closer inspection, it was an old turtle that had passed onto another dimension a few moments earlier. It was large – the shell about 18 inches in length. It had a small hole in the shell and one of the scutes was missing, but that was not the reason for its demise. I have never seen a lake turtle this size.

I blessed the turtle, hoping that finding it was a sign of the circle of life and nothing ominous since I had just been writing my intentions for Harmonia and our logo is an ancient symbol for the turtle. I meditated next it for a few minutes, then went back and cut some flowers to put around it, meditating a little longer until the waves washed some of the flowers away.

Two nights ago I drew the Transformation card in my tarot deck. Death to the old. That is what I have been trying to do for the past several weeks – release the past and all of its energies. I have also been doing guided meditations by Dr. Joe Dispenza, whose name kept popping up in my YouTube suggestions. I mentioned him to Gwendolyn and she handed me one of his books, Becoming Supernatural. So weird how we were on the same wavelength. I was supposed to go to San Juan del Sur today, but have to ration my gas and cash until my debit card arrives, so I spent the day reading the book. I was doing one of the exercises when Linda called me to the beach.

The concept of the book is that our emotional responses are conditioned by our routines and until we break the cycle, we cannot attract what we really want from life. We have to change our mindset and let go of old patterns. He goes further to explain that inside every atom is 99.99% empty space and that our emotional vibrations fill the space within the atoms of the frequency of our state of being. The idea is to charge the empty space with positive emotion to help the body and manifest the future we desire.

I have felt this for a few months and one reason that I am looking forward to the ceremonies next month to find closure for my old life, but still unaware how the new life will manifest. I have had to let go of predicting how it will happen, which is hard because I am a good prognosticator, just not for myself.

The photos below represent my old life. One is an old hutch that was in the kitchen when I first opened El Gato Negro that eventually housed some of the book inventory. The other is the painted armoire that was once Kiel’s then moved to Gwendolyn’s studio and then to Gato to display her art. When I left San Juan del Sur, I brought these two pieces of furniture there, assuming that I would assemble the yurt and move onto the land as a pioneer woman. Thank goodness I didn’t manifest that! The rain came and I had no way to transport them to some other place, so they sat there, chewed up by termites and rotting into the ground, a symbol of my old life returning to the Earth. These photos are over a year old. Currently, all that remains are painted wood scraps underneath some weeds.

Yesterday, I did miss my old life. Well, I missed the financial security I had in my old life. Trips to Pachamama for workshops and dancing under the stars all night and frequent trips to the US to see my family were the norm. My sister has to have surgery on her foot after having dealt with cancer over the past couple of years and it has been so hard not having the resources to visit and help her. I was really feeling it yesterday without a debit card and deciding how to ration my cash and gas for the next week or so while trying not to put fear into how I am supposed to manifest Harmonia. In this sense, the turtle is symbolic and I am grateful that I could bless its journey to worlds beyond this one. 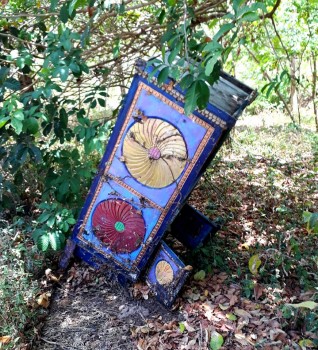 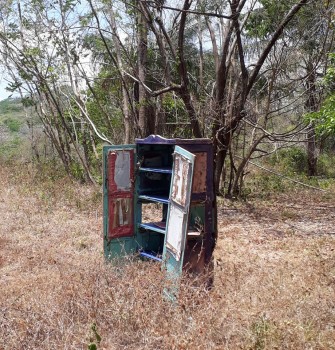