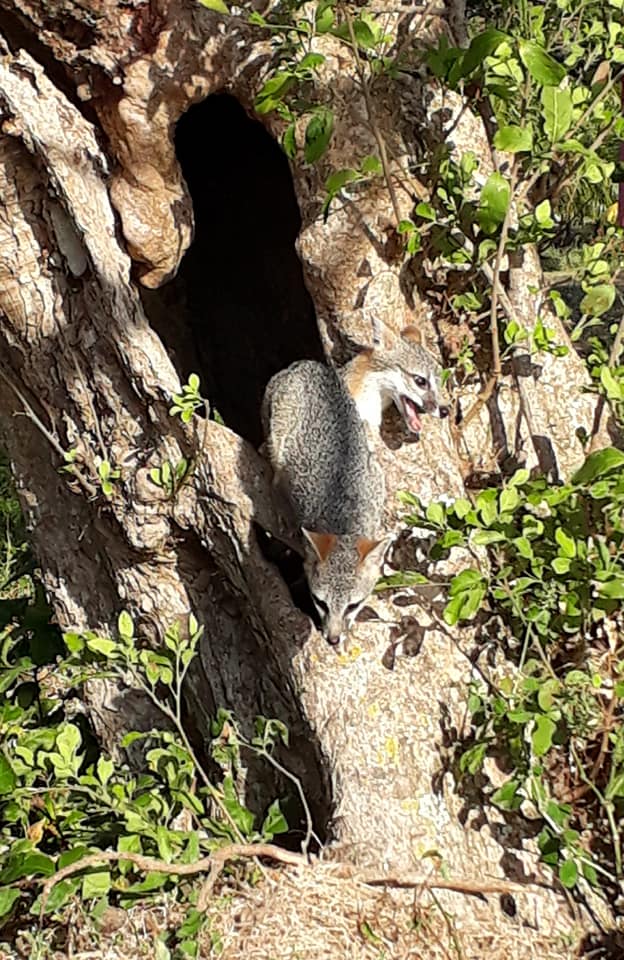 A wildlife rescue and rehabilitation center has always been part of the master plan for Harmonia.  Four months ago, I was fortunate to take in five 5-week old fox kits that had been raised by humans since they were a week old.  A dog killed the mother and a local man found the kits with their eyes still shut.  Zia, a cowgirl working at Rancho Chillamate in Escamequita, took them in and cared for them for the next month.  A few days before I left for a short trip to the US, Zia asked me if I would release them at Harmonia.  Naturally I agreed and admittedly forgot about it, too distracted by family and friends to research how to care for and relocate foxes into the wilderness while I was stateside.

The day after I returned from vacation, I ran into Zia at the Farmers Market.  She needed to return to Europe and asked if I could take them.  Forty-eight hours later, I became a foster mom to five baby foxes.

They were far too young to be released.  In the short research I did during that 48-hour window, I learned that foxes stay with their mother for 7 months.  Denial kicked in as I convinced myself that after a month or so, they would be fine.  I had no idea how I was going to get through this experience.  All the research said that there should be minimal human contact, but they had spent their first month with a cat, squirrel, parrot, turkey, and two dogs in addition to several doting humans.

They were crawling around my 4Runner before I ever made it home.  Thank goodness Shelley was with me to keep them from getting under the gas pedal and clutch.  They met the cats and dogs within the first hour and it was love at first sight – at least by the foxes.  It took a few days before the dogs and cats did not run away from five fox kits who thought they had found their mom.  (Scruff, my neighbors’ male dog who thinks he is supposed to live with me, has large nipples and the foxes were very confused.  Poor Scruff!)

They were too young to eat raw meat, so I opted for canned cat food, raw eggs, puppy kibble, roasted cashews and fresh fruits like papaya, mango and cantaloupe.  I later discovered they love shredded coconut after they tore open a large bag sitting on my dining room table.  They also like (to steal) croissants and French baguettes, much to my annoyance.  Oh, and they love to knock my coffee onto the sand and roll around in it!

Zia had constructed a box for them, but they quickly decided that the motor of my car was their ideal sleeping spot.  I am not sure why I popped the hood the next morning, but I was glad that I did, as all five were sleeping underneath the hood.  I had to clear them out of the car (and the well of the spare tire) every time I needed to go somewhere.  Occasionally they would not budge, forcing me to cancel my plans until dinnertime.

Their love for me was instantaneous.  They crawled all over me, smothering me with fox kisses and love.  I cannot even begin to describe the feeling of holding five fox kits in my arms at the same time.   They bonded with Shelley (who owns the house where I live), but they kept their distance with other visitors.  When they were younger, they would sniff visitors and tolerate other people holding them, but by the time they were twelve weeks old, I was the only person who could pick them up and hold them.

Our morning routine was something out of a Disney movie.  After an ever-increasingly early breakfast, I would announce, “Beach time!” and the foxes, dogs and at least one cat (Sufi) would lead or follow me to the beach on the lake while I drank coffee and watched the foxes play with the cat and dogs as the sun crept over the horizon.  We would often repeat the routine in the afternoon sans coffee.

I made preparations to release them in Harmonia, but it was the dry season and the only source of water aside from the lake was from the stream that feeds the waterfall, which was too far away for me to check on them.  Huxley and Janice Joplin/Juanita (translated into Spanish) were the smallest.  Had I not fed them copious amounts of egg and extra canned cat food, they probably would not have survived.  Huxley started out as the smallest, but he eventually overlook Juanita in size and as of yesterday, he was the same size as Zeppelin.

You can see by their names that I was in over my head when it comes to animal rescue.  I have bottle-feed kittens and puppies and helped care for baby monkey orphans, but I have never participated in relocating a rescued wild animal from birth.  They were too cute and had interacted with humans before they opened their eyes, so it was hard not to treat them like pets, especially since they loved my cats and dogs so much.  And they loved me.  They understood my role in the pecking order and they identified themselves as relatives of the cats and dogs, but they still considered me their mom because I provided food and cuddles.  I loved them so much that it was impossible to limit my role in their lives.

Several friends reached out with contacts with wildlife rescue.  I contacted a few and got mixed information as well as a warning to not to name them or attempt to domesticate them or they could not be released back into the wild.  I like to think that Huxley, Janice Joplin/Juanita, Zeppelin, Dolly Parton on Jimmy Hendrix like their names.  After a while, when I called them, they would come.  I am pretty sure they figured out their individual names as opposed to responding to the sound of my voice.

We had many zany adventures, some of which you can read about on their blog at http://www.harmonia.life/fox-tales/ .

I tried to teach them how to hunt once when a bird struck the window and collapsed to the ground, but as I tried to shake the dead bird, Sufi ran over and snatched it from my hands while the five little foxes looked on in awe.  I witnessed them play with and eat a baby fer-de-lance, so they must have got the lessons from the cats.  What I did teach them was to share.  All five would eat from the same plate without hissing or growling, and eventually the foxes and all of the cats shared dinner plates of food as well.  Even my older cats tolerated the foxes and would share the same bowl with them without a hiss.

Over the past month, I could see that it was time for them to integrate into the wild.  The problem with relocating them in Harmonia is the lack of foxes here, regardless of the field guide information.  It is too wet.  They prefer the drier climate along the Pacific coastline 10-20 miles east of Cardenas.  If they were to stay here, they would have to reproduce with each other and one male would be left out.  I had vets suggest I spay and neuter them, but it didn’t feel right.  This would kill some of their natural instincts and make them pets.  As cute as they are, they are not meant to be domestic animals.  They chewed up three pairs of Crocs, one of the straps on my backpack, my leather hat, three of my expensive bras, two cell pone charging cords and they made an attempt at my MacBook charger among other things.  They are mischievous in a way that is cute to outsiders but economically frustrating.  And did I mention the chickens?

For the past two plus months, the foxes made their dens under my neighbors’ pooch and mango trees.  They have birds and chickens.  We had hoped that they would learn that he neighbors flock was off-limits, but a couple weeks ago someone caught Jimmy Hendrix roughhousing with a chicken.  We all tried to convince ourselves that it was just playing because they loved the foxes almost as much as I do.

On solstice, I returned home to discover that Juanita had been hit by a motorcycle.  I was heartbroken.  She was my favorite and the one who loved to play with Sufi each morning on the beach.  It brought the brood down to three males and a female.  It was not going to work out.  It wasn’t fair to deny the other males the opportunity to reproduce.  I felt that they should be relocated to a spot near their birthplace, but there are too many chickens and too many humans who would kill them.

Fortunately, I ran into my friend Cati at the spay and neuter clinic in SJDS.  I showed her pictures of the foxes playing with my cat and dogs.  She was sitting next to Tim from www.vitalactions.org, a local NGO that has protected thousands of turtle eggs.  A few days later, I ran into Tim and Cati in Rivas.  Tim offered to help me relocate the foxes.  He instantly came up with a plan to move them the following week to a special spot near one of my favorite communities in Nicaragua.  A few days later, I messaged him.  It was urgent that we relocate the foxes ASAP, as one had just killed a chicken and bird and left another pet bird traumatized and missing a few feathers.

Tim wasted no time.  I collected the foxes at dinnertime and kept them inside with me overnight.  The following morning, I said my goodbyes, loaded them into two cages and drove to San Juan del Sur to pass them off to Tim and Cati.  We agreed that it was best that he release them so they could not follow my scent.  A few hours later, they were running through the forest between El Collado and El Congrejo, finally free to be foxes in nature where they belong.

The last 48 hours have been difficult.  It was so hard to keep them inside with me.  They were scared when I wouldn’t let them out.  I could smell their fear.  Dolly and Zeppelin crawled on my lap, something they had not done in a while.  Huxley let me hold him like a baby.  Jimmy Hendrix, the alpha, even let me give him some love before putting him in the cage.  It was so hard to see their sad, confused faces, but this is for the best.  As much as I had fantasized about running into them in the woods at Harmonia, they need to be where they will find mates and live long, happy lives.  I know that I will never see them again, but I take comfort knowing that they will be great parents to their own kids one day.

This experience has made me more committed to opening a rescue and relocation center at Harmonia.  As sad as I am at the moment, I am truly happy that they are living in the wild, in harmony with nature.  After all, that is the purpose of Harmonia.

Check out their release into the wild.